A brand new social housing development has been completed in Kilwinning by Cunninghame Housing Association (CHA) and CCG (Scotland) Ltd.

The site was previously owned by North Ayrshire Council and CHA acquired the site from the council in March 2016. 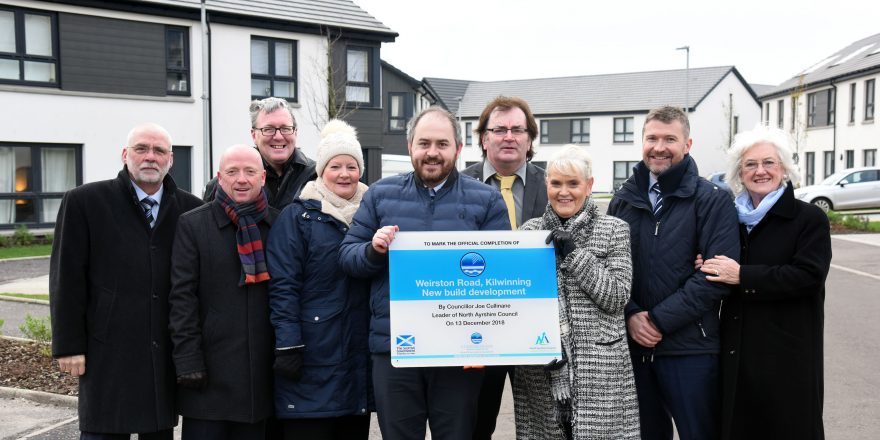 The development has been supported by strategic partners North Ayrshire Council and the Scottish Government including £4.5 million grant being awarded to support its delivery.

Weirston Road comprises a total of 64 new houses and flats for rent in a mixture of 2 & 3 bedroom general needs houses, amenity cottage flats for older and less mobile people, and 2 houses designed specifically for those with wheelchair needs. The homes were constructed using CCG’s ‘iQ’ panelised timber frame system to deliver on quality and environmental efficiency standards.

CCG chairman and CEO Alastair Wylie said: “One of the first projects to have been procured through the Scottish Procurement Alliance NH1 Framework, Weirston Road has brought much-need affordable homes to Kilwinning. The development is a leading example for quality and sustainability standards and we are in no doubt that long-term benefits will be felt by the new residents.”

CCG also delivered a robust programme of community benefits including three full-time jobs, one trade apprenticeship and two work placements with a further donation to Kilwinning FC for the procurement of football kits.

Frank Sweeney, chief executive of Cunninghame Housing Association, said: “The Association/North Ayrshire Council and our contractor CCG are all committed to creating and maximizing benefits for the community. The Weirston Road project is a testament to this partnership working and what it can achieve.”

Councillor Joe Cullinane, leader of North Ayrshire Council, who officiated the official completion ceremony, said: “I’m delighted to have helped with the official completion ceremony of this fantastic development in my hometown of Kilwinning. Here in North Ayrshire, we have the most ambitious house build programme in the country which, working with RSL partners such as Cunninghame Housing Association, will deliver over 1700 new social houses over the next few years.

“That house building programme will deliver new, high-quality, affordable housing for our communities but it also represents an economic investment in North Ayrshire of hundreds of millions of pounds. That is creating employment opportunities for local people including young people as was the case with Cunninghame Housing’s development here at Weirston Road.

“I very much look forward to working with CHA and others over the next few years as we transform the lives of many families across North Ayrshire through our investment in housing.”

The Weirston Road project was procured through the Scottish Procurement Alliance (SPA).