The Scottish Government’s Building Standards Division on the latest changes to sprinkler regulations. 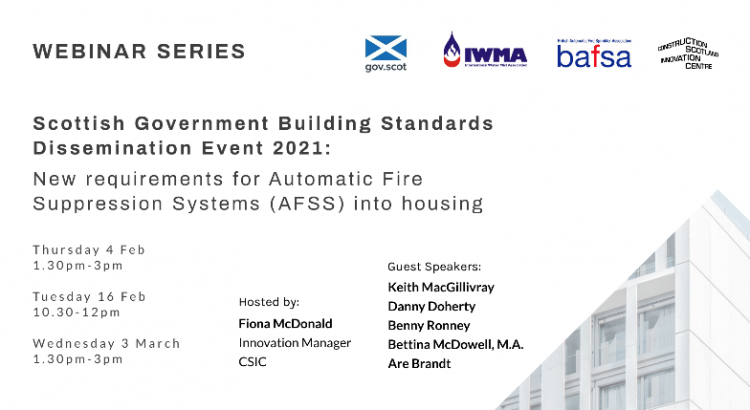 Work on fire safety, including greater provision of automatic fire suppression systems, has been taken forward as part of the Ministerial Working Group on Building and Fire Safety, formed following the Grenfell Tower fire in London in 2017.

An important part of this work was to increase the provision of automatic fire suppression systems. The changes mean that all new-build: social homes; flats; and shared multi-occupied residential buildings must be fitted with automatic fire suppression systems from March 2021. Previously, this was only required in domestic properties where they were in high rise blocks of flats above 18 metres.

On 22 May 2018 David Stewart MSP lodged a final proposal for a Social Housing (Automatic Fire Suppression Systems) (Scotland) Bill.  There were 354 responses to the consultation and the Bill received cross party support.

The Scottish Government confirmed on 20 June 2018 that it would initiate legislation, within the current Parliamentary session, to require new-build social housing to be fitted with automatic fire suppression systems before the end of the current Parliamentary session.  As the building standards already required automatic fire suppression systems in high rise flats the option to extend the mandatory requirements was the preferred route for social housing as well as all flats and shared multi-occupied residential buildings.

Between June and September 2018, the Scottish Government consulted on a range of proposals to improve fire safety in new buildings. There were 222 responses to the consultation and the majority of these improvements were introduced into regulations in October 2019.

Following the laying of regulations on 9 September 2020, the full detail of these changes are now published within the Building Standards Technical Handbooks.

Three dissemination webinars have been arranged, please click on the links below to register.