Our Housing Heritage: George Gibson – the man who built Paisley

Duncan Smith, who works in the social housing sector, has contributed this piece as part of his quest for more information about housing architect George Gibson.

Several years ago, just after starting my current job, I undertook some research on the properties we were refurbishing at the time. I found the name of the man who was responsible for commissioning and building a large amount of them back in the 1920s and 30s.

His name was George Gibson and he fascinated me for the reasons I’ll explain later.

I started to try and find out more about him. However, after eight years of searching on and off, and contacting everyone from the National Records Office to the Royal Institute of British Architects, I seem to have come to a dead end.

For that reason, I’m writing this in the hope that someone can provide some more information or point me in a direction that I’ve not already taken so far.

The story of George Gibson is one of hard work and dedication. He was born in 1893, the son of William Henry Gibson, a plumber, and his wife Annie Watson Robertson a seamstress. He grew up in typical working-class conditions of the day, in the old tenements in the George Street Paisley, which have now been demolished.

He was apprenticed, or articled as they called it in the day, to William Watson of Watson & Kerr Architects in Johnstone when he was fourteen, yes fourteen! Changed days.

During the day he worked at the practice and at night he attended art classes for a couple of years, in order to learn how to draw, at Camphill School in Paisley.

He studied at the school between 1907 to 1909, which wasn’t too far from where he lived with his parents at the time and where the new Castlehead high school now stands.

After completing this course he took classes at Paisley Technical College until 1913, remaining at Kerr & Watson as an assistant after completing his apprenticeship in 1912. 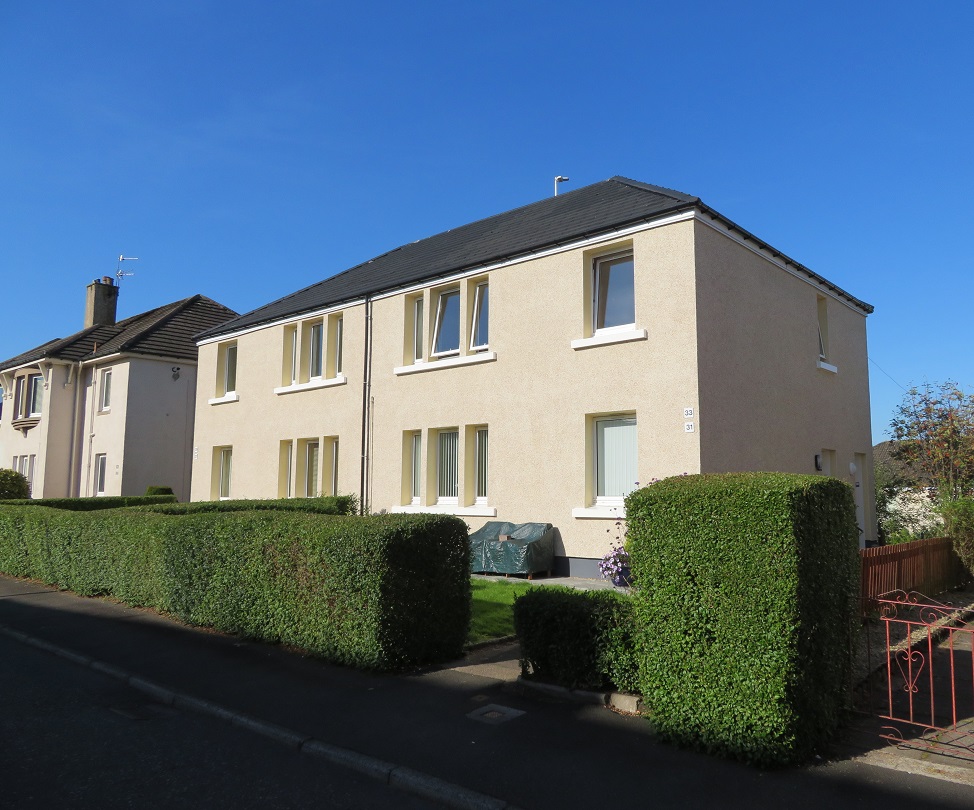 When the First World War broke out in 1914, he would have been twenty-two and like most young men of his generation he saw service abroad. I believe he served on the Western Front as a 2nd Lieutenant although I’m not sure which regiment. After the war ended he returned to Kerr & Watson as chief assistant in 1919.

He took classes in Mathematics at Paisley Technical College advancing his skills and prospects to take him to the next stage of his career.

In 1922, when he was twenty-nine, he left Kerr & Watson to take up a post as architectural assistant to the Master of Works of the County of Renfrewshire; this would be the start of his move up the career ladder.

Three years later he secured a similar position in the Corporation of Glasgow and three years after that, in 1928, he moved back to an equivalent post in Paisley when he was thirty-five.

He stayed at Paisley Town Council for the rest of his working life, being promoted to the position of Housing Architect in the Paisley Master of Works Department in 1939.  This would have been the culmination of all his hard work and study over the previous three decades and must have been a very proud day for him.

Through his working life George Gibson was involved in designing and delivering some enormous housing projects by today’s standards. We get the shovel out for a dozen units but from my count anywhere up to fifteen thousand new homes were built whilst he was working in Renfrewshire, which at the time included Barrhead and Neilston as well as Paisley, Johnstone and Renfrew.

He was responsible for the modernisation of social housing across the county and commissioned, designed and built areas such as Whitehaugh, Hunterhill, Gallowhill and Lochfield as well as most of Ferguslie Park.

These projects would have been headline grabbing, in terms of their scale in today’s world, with some being up to 2,000 units in size. But they were also such enormous social improvements for people coming from the 19th century squalor of overcrowded, unsanitary tenements to houses that had running water, inside toilets and most importantly living space.

This type of space could be used to relax and play with the family in, such as garden and separate bedroom and living space; many tenements had recessed beds in the kitchens at this time.

This type of living space that we take for granted today was far from standard back then, in fact it was the exception and not the rule for vast the majority of working-class families.

But George Gibson didn’t just design and build homes. He also designed and built local shops and amenities including bowling clubs and green spaces to serve the people he built those homes for, forging a sense of community to these areas and leaving a legacy of civic cohesion.

He was still the Housing Architect at Paisley when he was admitted to the Royal Institute of British Architects (RIBA) in 1945. Towards the end of his career when he was sixty-three, and due to retire, he was elected Fellow of the Royal Incorporation of Architects in Scotland or FRIAS in 1955.

I think this would have clearly been the recognition by some of his peers (Jack Coia and James Maitland) as a result of the work that he had been involved with whilst at Paisley, even though he hadn’t taken the traditional, or academic route to becoming an architect.

However, it’s the fragments of information that I’ve gleaned from my research that gives me a tantalising glimpse of what the man might have been like and perhaps what he believed in.

From the census records I know that he stayed in one of the homes in one of the schemes that he built in the 1920s and 30s in Whitehaugh, Paisley, living bedside those he was responsible for housing. Even by those days standards I’m not sure that would have been usual.

Most interestingly he published a number of fascinating papers on “The Requirement of the individual and the family in Community Life” poems called “The thoroughfare” and articles on planning called “Planning for Posterity” and “Stones of Scotland”.

I went to London and visited RIBA a number of years ago only to find out that his box was empty.  Unfortunately, none of what he’s written still survives, and has been lost over the last fifty years.

It’s a great shame as I’d love to have read what he had to say.  I think he had a lot to say.  But just from those titles of his work alone, they convey that this was surely a man who built more than just houses; but a man who cared about those who lived in them.

When I read those titles, I see an egalitarian and humanitarian man shaped by his working class childhood, growing up in the tenements of the 19th century, and forged by his experiences in the First World War where he served on the Western front.

Building homes for the men he initially played with in the streets of Paisley as a boy and then fought alongside in the trenches of Flanders so they could come back home to live a peaceful and prosperous life in.

I went through to the National Records Office in Edinburgh and carried out some research a few years ago. I found out that he married late in life, in his 40’s, and had no children, well none that I can find.

He died at his home in Townhead Street in Paisley in June 1966 when he was seventy-three, survived by his wife and his brother, who signed his death certificate.

For a man who was responsible for such social change, such improvement in the lives of people in Paisley during the 1920s and 30s there’s no statue or street named after him. There’s no monument, or memorial not even a bench with a plaque.

That such work, such purpose and such commitment from an individual to society and his sense of civic duty has gone unrecognised and forgotten in the modern day is tragic.

History is full of “bad guys” and “bandits”, as my son would say, who are remembered for all the wrong reasons but if you look hard enough, you’ll find plenty of heroes.

For me George is a moral hero who gave his time, his labour and his purpose in life in the pursuit of a better world for others; and he is deserving of our recognition as a result.

The team that I work in are responsible for part of his legacy, through the work that we do to maintain and improve the homes he built. If anyone has any more information on George, then I would be grateful if you could share it with me or pass this request on to someone who might be able to help.